May I introduce:
Solmaz Farhang 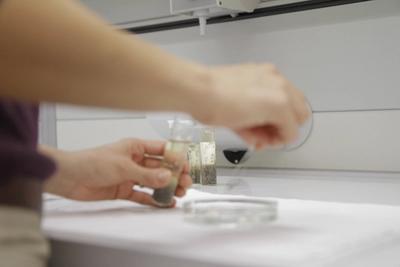 Solmaz is a visual artist-researcher based in London. She is a graduate of the Art and Science Master programme at University of Applied Arts Vienna. In her interdisciplinary approaches she investigates the complexities and contradictions of the human psyche along with the interrelations between individuals and societies. She strives to desacralize ignorant beliefs and question society’s prejudices.

Farhang works across multiple disciplines. Her practice materialises in many forms, including photography, videos, multimedia installations, book illustration and science communication projects. Her recent works centres around art and science collaborative projects, the importance of knowledge transfer and its relevance to our current affairs.

If the scientists of the limnology department would come into your “lab” (art studio), how would they be influenced, what would they research there?

That needs a good imagination…. I guess they would find some extra ordinary objects in my studio to investigate. Perhaps they would be influenced by the way I experiment with the unknown. Actually that would be great to have them in my “lab”. I only hope they wouldn’t aim to study the stones in my inner ear. :))

May I introduce: Alien - how do you see your work in relation to the others and the title? What inspired you to be part of the project (May I…)?

I think my work has a lot in common with other projects and at the same time it is different. Similar to the other projects, the Portrait in the Lab centers around being perceived as an alien. Perhaps what differentiates Portrait in the Lab is that here the artist becomes the alien. It puts the artist alongside the fish larvae under the micro lenses. And that is exactly what inspired me to take part in this project. To embrace the feeling of being an alien with other aliens in our universe.

What is one of the most important inspirations for your work “Portrait in the lab”?

The lab itself and the dead bodies of fish larvae.

Which species would you choose to investigate, if you’d be a scientist in a lab?

Difficult to choose. I think I would still study the Homo sapiens but I am also keen to investigate the life of the trouts in different rivers around the world.

If so, what can the artist learn from the working routine in the lab?

I’m not sure if the routines are much different. One might find it useful to learn how to stay organized and keep the working place clean and safe ;) What I personally find helpful is the habit of taking notes about all the details of the research not to overlook anything although you may do so anyway.