May I introduce:
Alexandra Fruhstorfer 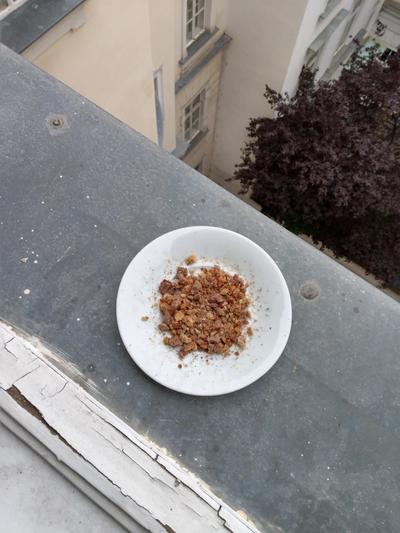 Alexandra contributed Making Oddkin to 'May I introduce: Alien'. She is a transdisciplinary designer with an investigative and research driven approach. After graduating from Industrial Design, now Design Investigations, at the University of Applied Arts Vienna in 2017 and working in London for a bit, she is now based in Vienna.

Within her creative practice she uses design as experimental tool to question prevalent political and cultural paradigms, while trying to embrace phenomena of accelerated technological and ecological change.

She works across various media. Whether in design research processes or in participatory workshop projects she enjoys working in collaboration with others. Currently her main interest revolves around how our understanding of work is related to our anthropogenic impact on our planet.

With whom would you live together (in the house in 2025) and how - the crow, the pig or the racoon?

Hard to decide. The crow is very independent and easy to live with, but it‘s not so easy to bond (believe me, I tried), crows seem to be very sceptical. I doubt the pig would make it up into our 4th floor, we don‘t have an elevator. Intuitively I would say the racoon, they seem to be fun. Though they are super curious and might turn your flat upside down, but they are also night active, so this would be a good fit with me.

Why would we live together in a house with animals and not in nature?

I like the idea of them entering our spaces, and not we entering theirs. I think up til now it was and is a kind of one way street. Humans cultivate land, pour concrete - spreading profusely. To me the private home is THE manifestation of the famous culture-nature divide. We build houses to protect us from the wild, to keep it out, to be safe and sound, to not have to deal with the trouble out there. In the project I suggest we adapt ourselves and those built spaces of human culture - our comfort zone - to the needs of other species as well. Also to really feel what it might mean to have to change our habits if we want to keep some of what we call nature in our age of environmental devastation and the ongoing 6th mass extinction. It is about taking responsibility maybe.

What is your most important source for “Making Oddkin”?

As the title suggests I‘m highly inspired by Donna Haraways writing. She coined the term „Making Oddkin" to describe the need for unexpected collaborations and combinations between humans and non-humans to form other kinds of kinship beyond our too well known anthropocentric worldview. Especially her book „Staying with the trouble“ was a huge inspiration for my process. So I stole „Making Oddkin“ as a title :)

May I introduce: Alien - why this title and why did the project interest you?

Violetta and I liked the ambiguity within its meaning. On the one hand we want to introduce different interpretations of what alien might mean in an age of global entanglements to the audience. On the other hand we play with otherness and foreignness and ask: What if we introduce something or someone perceived as "different" into other times, other spaces, other disciplines, other contexts?

Can the racoon be trained in its behaviour or do we humans need to be trained?

The act of training is a mutual process I think. By training the racoon, both the human and the other animal become something different within the process. I think both could and should be trained, but training humans might be the bigger challenge.

From eating alien invasive species to living together with them? How come?

I think what was missing in my previous approach of Menu from the New Wild was to really question our anthropocentric world view. Eating invasive species might sound like a good idea to achieve our goal of balancing nature in a way we want to have it. But it also feeds on the very conservative and dangerous capitalist principle of economic exploitation. I think it will not be enough to look at environmental and sociopolitical matters only through the lense of monetary value, numbers and short-term benefits. This is rather the cause of the problem than the solution.