May I introduce:
Andrea Palašti 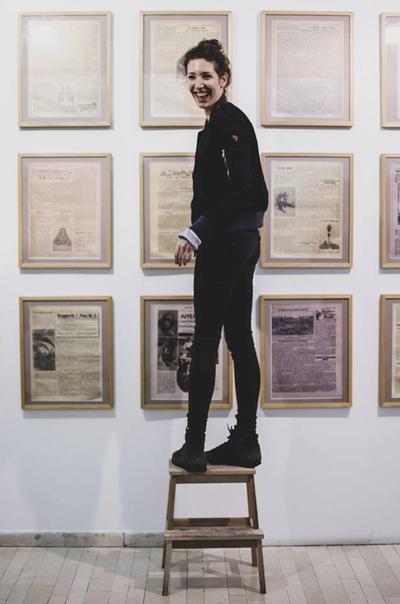 Andrea works across artistic and curatorial boundaries that experiments with archives, methodologies and contextual aspects of art, concentrating on issues of cultural geography, history and everyday life. Since 2014, she has been collaborating with Daniel Popović (b.1978) on investigating vernacular photography and its potential to unveil a nuanced understanding of the world.

She has recently been appointed as a docent at the Academy of Art in Novi Sad, where she teaches Visual communications, blending her collaborative artistic research projects with educational strategies.

How did you first meet Emil?

He was in a box. A box labeled: Primates. And just accidentally, while going through the photographs in it, I found his picture, with his name on the back.

How do you interpret the term alien in your project in relation to the exhibition?

We are all aliens, looking at each other. We are observing animals, but always tend to forget that animals look back at us, just as much!

What would you like people to take with them from your project, is there something you would like to trigger in people?

Natural History Museums and Zoos do not represent nature itself, but they reflect the relationship of our culture towards nature. This work is a modest attempt, to tell a story of a species in disappearance. As John Berger wrote - animals are disappearing everywhere, and Zoos are the only places where they form a living monument to their own disappearance.

Have you ever seen an Orangutan in real life? How was it?

Animals are economic, symbolic and political resources. How do you see these influences in your work?

Emil’s stay at the Schönbrunn Zoo coincided with the modernization and the scientification of the Zoo management. Internationally respected zoologist Otto Antonius was the first scientist ever to have been appointed as a director of the Schonbrunn Zoo. And Emil was one of his favored animals!But on the other side, this was also the time of the controversial discussions on back-breeding. Otto Antonius was interested in bringing back ancient “Germanic” equids by selective breeding from existing species. Even though he was a remarkable naturalist, Otto Antonius was a long member of the NSDAP, and in April 1945, he committed suicide together with his wife. These connections and contradictions are inscribed as a subtext in my work.