May I introduce:
Ege Kökel 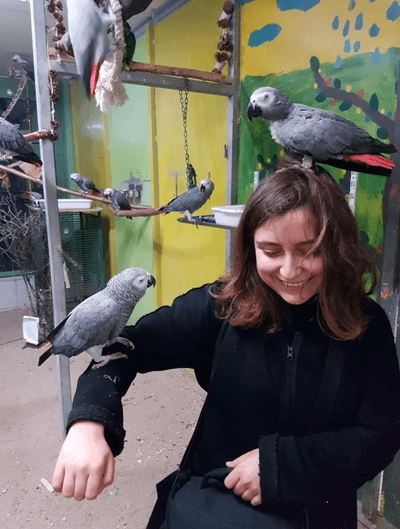 Ege is a designer who received her master's degree in Industrial Design/Design Investigations from the University of Applied Arts in Vienna. Her interest lies in the intersection of emerging technologies, science and design. She uses design as a tool for speculation, sense making and research. Collaborating with others/other disciplines and exploring different viewpoints are important aspects of her work.

In her practice, she tries to delve into complex topics through tangible design means. Currently, she is interested in entangled and messy relations between species. She is also working at Biofaction, a Viennese science communication company, where she collaborates with scientists, researchers and filmmakers on synthetic biology projects.

I very much like my project’s blue dodo and the fact that it is out of paper. :)

May I introduce: the dodo? What inspired you to research on dodos?

When I decided to make a project about de-extinction, I wanted to focus on one species so I can dig deeper in research and explore its revival scenario in a detailed way. There are many reasons why I decided on dodos, from them being the symbols of extinction to the fact that de-extinction of dodos had already been mentioned by researchers. However, the most important reason was the fact we knew so little about these giant flightless birds and there was a lot of speculation going on in history. (Probably now, too.) I was inspired very much by how every painter that painted the dodo was in a way reinventing the bird or how every sailor who encountered the bird was redefining the characteristics in their accounts.

What was your most surprising finding during your research process on the dodo?

Surprising in a bad way, this.

How do you interpret the term alien in your project in relation to the exhibition?

Dodo in the Room makes a scenario tangible, in which dodos are resurrected. They are brought back to a world, in which they hadn’t been for a long time, or never existed before. (Since their genome would be different than “the original dodos”) They become invaders, strangers and aliens.

In which scenario do you think it is justified to bring back an extinct species?

This is one of the biggest and hardest questions that I try to raise with my project. I hope we can explore it together through my work!